Portable IDI Benefits Have Even Greater Value in the Gig Economy 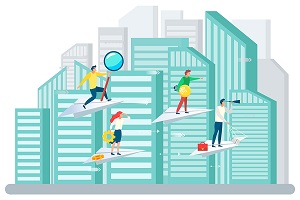 The gig economy is changing the way people work. It’s also changing the way they get benefits. This trend isn’t likely to reverse anytime soon, so it’s time to make sure people have access to the benefits they need, wherever their careers take them.

What Is the Gig Economy?

When we talk about gig workers, you may instantly think of people who work for Uber, Instacart or other app-based companies – but the gig economy goes way beyond this.

Anyone who works as a freelancer or independent contractor can be considered part of the gig economy. These workers aren’t traditional employees, and they may juggle multiple gigs. They may also be highly paid consultants in a variety of industries.

Some people joined the gig economy in 2020 when they were furloughed or laid off from their regular jobs because of the pandemic. Others have turned to gig work because they enjoy the freedom and flexibility.

According to Upwork, 36% of the U.S. workforce freelanced during the pandemic. That’s an increase of 2 million workers from 2019. Half of these workers provide skilled services, like IT services and marketing, and 75% of people who have quit traditional jobs to freelance full time say they make as much money or even more than they earned as employees.

Many employees consider their benefits to be a key part of their overall compensation package. For freelance workers, however, relying on employer-sponsored benefits creates a problem.

Freelance workers aren’t technically employees, so they don’t usually get the perks that employees get. This includes insurance coverage.

What Happens When Employees Quit?

Some of these people may find better jobs, possibly in new careers. Others will likely join the gig economy.

So what happens to their benefits?

Some benefits are portable. This means that employees can choose to keep them after they leave a job. Other benefits simply terminate. As Investopedia explains, group disability insurance policies are tied to the job, and they are not portable. When employees voluntarily leave, they lose their coverage.

As more workers quit their regular jobs and join the gig economy, they’re going to need insurance coverage that isn’t tied to an employer. Group disability insurance isn’t typically portable, so it won’t cut it. Individual disability insurance, on the other hand, is completely portable. It’s not tied to an employer, so workers can take it when they switch jobs or go freelance.

Right now, your clients might be among the millions of Americans making major career changes. Talk to them about the importance of portable disability insurance coverage.

Even if they’re not self-employed yet, they may want to secure a supplemental IDI policy to maximize coverage and to better position themselves to be agile if and when a new opportunity presents itself.