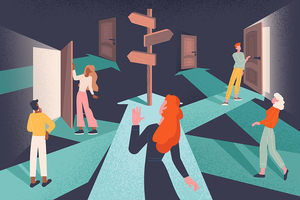 To sell disability insurance, you have to understand human nature. Like most sales, the decision to buy disability insurance isn’t solely based on logic. There’s a lot of emotions and other factors involved. You may even encounter a condition known as “omission bias.”

To understand how omission bias works, let’s look at a very real example happening all around us right now … COVID vaccine decisions.

Some people have strong opinions about the COVID-19 vaccine, but there are also the people in the middle – the people who keep hearing conflicting information and don’t know what to make of it all. Some of these people will avoid acting because of their uncertainty. In other words, they won’t get the vaccine, not because they’re opposed to it, but because they just aren’t sure what results their actions will have, so they decide to do nothing.

The inaction is called omission bias, and it’s a common psychological phenomenon that goes way beyond vaccine hesitancy. It can impact all kinds of decisions – including the decision to buy or not buy disability insurance.

You’ve probably heard of the famous trolley problem before. There are many variations on this thought experiment, but the standard dilemma involves a track that forks in two directions. A trolley is coming, and if it continues on its current track, it will hit a group of five people. You can switch the track to change its course. If you do, the trolley will hit only one person. What do you do?

Surveys have shown that about 90% of people say they would flip the switch, saving five people by sacrificing one. This indicates that many people believe in taking the action with the greater good. The 10% of people who decide not to switch the lever may be reacting based on the omission bias. This is the tendency to give greater weight to harm that we cause through action than harm that we cause through inaction. In other words, we don’t want our actions to be directly responsible for anything bad. We’d rather not do anything at all. Then, if something bad happens, it’s not our fault.

The trolley problem is hypothetical. You probably won’t find yourself having to make a life-and-death decision involving trolleys – but omission bias has some serious real-world applications.

According to an article published in the Journal of the American Medical Association, nearly everyone is subject to omission bias. It is thought to be one of the reasons some people don’t vaccinate. Even if they know the risk of a negative reaction is unlikely, they feel it is a possibility, and they don’t want their actions to be directly responsible for causing harm. They would rather do nothing.

So, what does this mean for disability insurance? When faced with the decision to buy disability insurance, people may worry that deciding to spend money on premiums could harm their finances. They may realize that not doing anything could cause much greater harm to their finances, but because of omission bias, they feel more comfortable taking this risk. They decide not to get coverage.

When faced with the choice between action and inaction, many people will pick inaction. It’s human nature, and you can’t change that – but you can frame the choice differently.

Make it the choice between two actions:

This takes inaction off the table, and it makes people take responsibility for their decision not to get coverage. It also protects you from future claims alleging that you didn’t offer important protection.